The Champenois are optimistic that the 2019 harvest will be small but beautiful.

It’s been an unpredictable year, but then again aren’t they all?

On the weather front, temperatures have been up and down like a yo-yo

A very mild winter was followed by record high temperatures in February which lead many vignerons to fear
an early bud break (Débourrement) and an increased risk of damage due to spring frost.

It seemed for a while that their fears would not de realised but just when it seemed the danger was past, a cold
snap in May destroyed about 3% of the crop.

Then came the heatwave in June when temperatures in some spots reached 43℃.  As much as 10 % of the grapes
roasted as they hung on the vine (Échaudage).

That was followed by more hot and humid weather in July and August which created ideal conditions for mildew
and oidium to spread in the vineyard. Chardonnay was particularly susceptible and it could turn out
that another 5% or more of the crop will be affected.

Although most villages started picking in the week commencing 9th September, the harvest started
in some villages on 2nd September and this was unexpected too. On the basis that the harvest traditionally
starts 100 days after flowering, it was estimated that picking would begin in mid-September. The announcement
of the start dates was scheduled for September 7th, but in August the grapes ripened far faster than expected
and the announcement of the start dates was brought forward to August 31st.

Amidst all the activity the vignerons are resigned to a small harvest, but reports coming in from all quarters
are uniformly positive: Charles Philipponnat of the eponymous house reports good levels of sugar and
acidity (11.5% volume and 6-7 grams of total acidity respectively, for those readers who want the fine detail).

It seems that there is every prospect of a vintage year, provided pickers are careful to pick only healthy bunches,
but that’s not to say that every house will declare a vintage.  Much depends on the house style of each player.

Gilles Descôtes at Bollinger is upbeat about the quality of the Pinot Noir in their vineyards and since the
Bollinger house style is oriented very much towards this varietal, one can foresee the releases of a Bolllnger
2019 in a few years’ time. The same may not be true however, of houses who rely more heavily on Chardonnay
to create their own distinctive signature, Ruinart for example.

As ever in Champagne, it’s a waiting game and the real verdict on the 2019 vintage will not be returned for
a good few years yet.

Meanwhile ‘small, but beautiful’ is the watchword.

For any other information please contact charlie@foreverthirsty.co.uk or call Charlie on 07771 510052

First impressions of the Champagne harvest of 2019 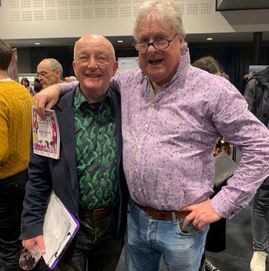